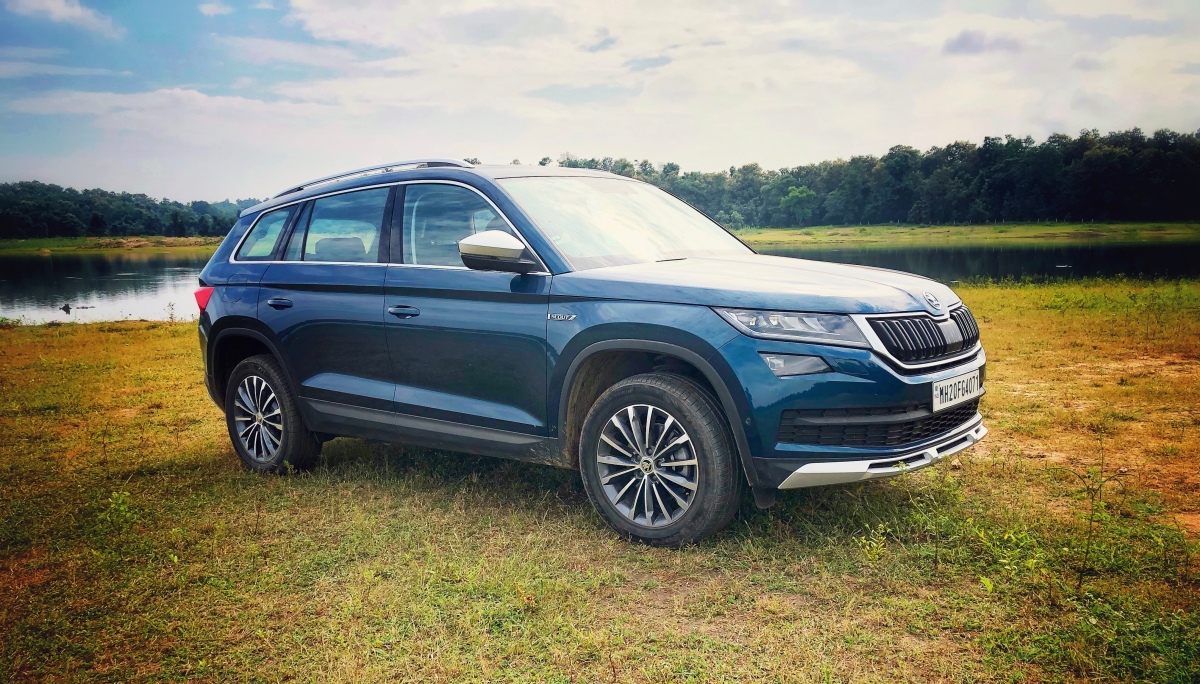 In a departure from tradition Skoda India organised the media drive for the Kodiaq Scout from Nagpur to Pench National Park in Madhya Pradesh.

The Kodiaq is a premium SUV that has been around for the last few years. Just recently Skoda launched the Kodiaq Scout which is an updated version of the Kodiaq. The Kodiaq’s off roading abilities see an improvement with the Scout. 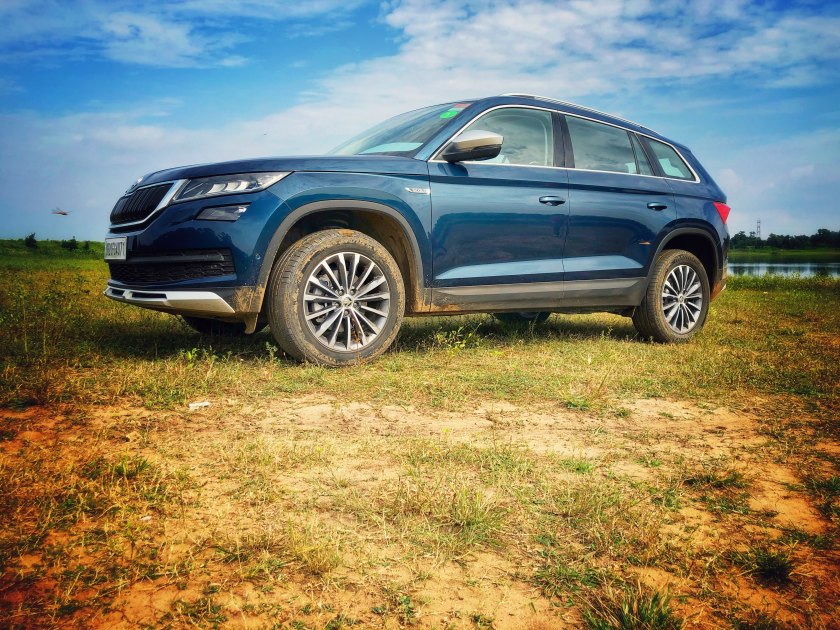 The front of the Kodiaq Scout gets an all-black grille and largish silver scuff plate on the bumper.  Walk around to the side of the SUV and you see black plastic cladding, new dual-tone 18-inch alloy wheels. The Scout badge is prominently displayed on each of the front fenders, the OVRMS get a silver finish. The rear bumpers get a new silver diffuser. The Skoda symbol has been replaced with the brand name spelt in chrome lettering.

The cabin of the Scout sees a change in the upholstery from the Kodiaq. The interiors are all- black, one gets dark polished wood trims on the dashboard and door pads. The dashboard also gets the Scout badge featured on it. The seat materials are a blend of Alcantara and leather with white contrast stitching. The Scout badge is stitched on the back of each seat.The seats and cabin are very premium, plush looking and very comfortable. Under thigh and legroom is good in all rows of the Kodiaq Scout.

There is a large array of equipment and features on offer in the Kodiaq Scout. The Scout comes with a 8-inch touchscreen infotainment system, Apple and Android connectivity, three-zone climate control, a reverse camera along with front and rear sensors and nine airbags. A new addition to the Scout is theTPMS (tyre pressure monitoring sensors). There’s a huge panoramic sunroof, large windows, manual sun blinds for the rear windows. The rear seats come with the Nap Package which gives you neck restraints integrated in the headrests along with blankets.

The Scout gets a 2.0 litre TDI engine which puts out 150HP mated to a 7 speed DSG transmission, all-wheel drive system. There’s a new off-road mode in the Kodiaq Scout where the SUV works in sync with the electronic assists which help the driver while off-roading. It also works as a hill descent control system which is very useful while descending steep hill slopes. All the driver must do is give the required steering input while the Scout slowly drives down such a slope. The Kodiaq Scout comes with the Rough Road Package that gives underbody protection to the oil sump, engine bay, gearbox and suspension. 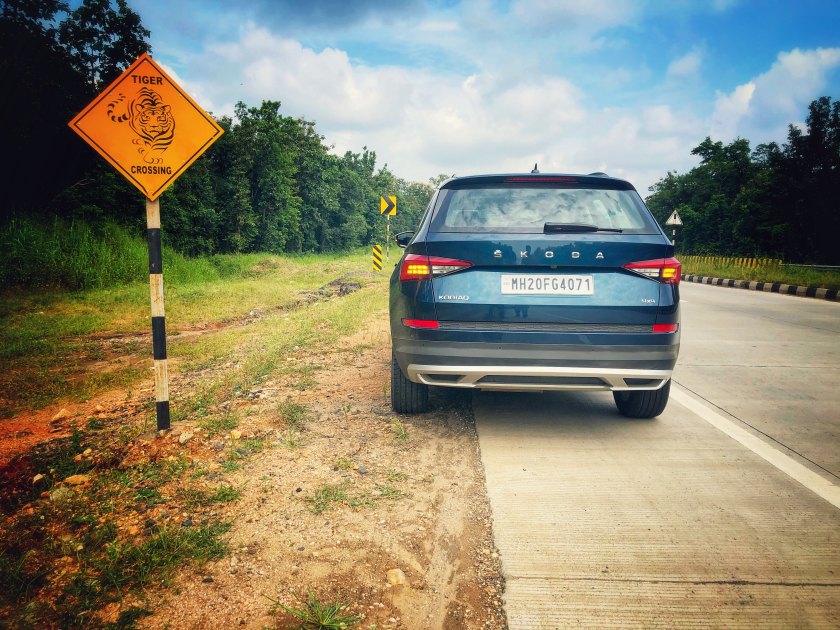 We started from Le Meriden in Nagpur towards Pench National Park in the morning. Large four lane highways, barely any traffic made driving the Kodiaq on these fantastic roads a breeze. Going up and down the gears is done smoothly enough without any lag. Braking is sharp, getting to 3-digit speeds is done fast enough. The Kodiaq Scout is the perfect highway companion to drive cross country.  The suspension setup is ideal for our Indian roads, it absorbs bumps and bad roads with ease. Visibility from the driver’s side is excellent courtesy the large windscreen and design of the SUV. We covered the distance to Pench National Park in under 3 hours.

Pench National Park is in Seoni and Chhindwara districts of Madhya Pradesh in India and includes Pench Tiger reserve. It derives its name from the Pench River that flows through the park from north to south dividing the park into almost equal western and eastern halves, the well-forested areas of Seoni and Chhindwara districts respectively. The national park consists of dry deciduous forests and much fauna and flora including tigers, various types of deer and birds. The Pench National Park legend says was the inspiration for Rudyard Kipling’s Jungle Book. As we drove through the reserve area lots of retreats are named after Jungle Book Characters. We even saw a poster of a local event named after Mowgli!

Post a sumptuous lunch at Baghvan Taj Safari Lodge, we experienced a small stretch of off-road terrain on our way to a picturesque lake. This small lake is one of the watering holes where one can sight tigers and other wild animals early in the morning.

The Kodiaq Scout is a premium SUV that is versatile, fun to drive on long trips, the off-road feature is great when one wants to go off-roading. Prices for the Skoda Kodiaq Scout start at 33.99 Lakhs ex-showroom Mumbai

OutVentures is a global platform designed to showcase unique & curated content from the worlds of travel, food, lifestyle, automotive and culture… With a voice of their own, each of our contributors share their unique thoughts & ideas, as well as their true-life experiences, giving our viewers a first-hand feel of the same. Our aim is to form a community of like-minded bloggers with the single aim of providing original content in a creative and highly stylized manner. View all posts by OutVentures